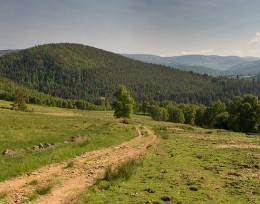 The path leaves the car park beside the Victory Hall in the centre of Aboyne and is on the old line again so gradients are gentle.

Continue west until you cross the A93 east of Aboyne, after a couple of miles you will arrive at a large layby and picnic area beside the Deeside Gliding Club airfield where you can watch gliders being towed up by plane and landing under their own steam. The path leaves the layby at the western end and continues on to Dinnet where it crosses the public road beside the old Dinnet Station, now the estate office for Dinnet Estate.

As the path continues on the landscape changes to heather and birch trees, an indication that you are approaching an upland area with glimpses of hills and mountains beginning to become more frequent. Eventually the path arrives at Cambus O’ May where you will see the old station building, now a holiday cottage and the impressive suspension bridge  over the River Dee. This a popular picnic spot in the summer popular with locals and visitors. As you leave Cambus you will pass in front of Cutaway Cottage, so called because when the railway was built  a section of the end of the cottage was demolished to allow the trains to pass.

Passing the Cambus O’ May Cheese Creamery, a short distance further on you will pass Tullich Kirkyard worth a short detour to view the old graves and historic stones. Crossing the A93 again the path approaches  Ballater, eventually winding between houses to finish at the Old Royal Station  now a visitor centre and museum with displays showing the Royal Family’s involvement with the Deeside Line dating back to Queen Victorias time.

Things to see along the way.